Founder of the International Schoenstatt Movement

Joseph Kentenich was born in Gymnich near Cologne in 1885.

In 1894 he enters the orphanage of St. Vincent in Oberhausen.

Upon entering this orphanage, his mother consecrated him to Mary, the Mother of God. Eight-year-old Joseph was very conscious of this consecration. Mary now takes over his upbringing and the care of him. "What I am and what I have become in Schoenstatt, I owe to the Blessed Mother," Father Kentenich confesses looking back on his life.

"She educated me from the time I was nine years old."

In 1904, he entered the Society of the Pallottines and completed his novitiate and theological studies in Limburg.

For years he had to endure a serious inner crisis that took him to the edge of his strength. The highly gifted Joseph Kentenich was driven by the question: What is truth and can I recognize it? His love for Mary is not touched by all the doubts and uncertainties that beset him. Through the Blessed Mother he finds his way out of his inner distress. She gives him a share in her love for the Triune God and for mankind in an unexpectedly profound way.

"God is my origin, God is my goal - He must also be the guiding star of my life."

In 1910 he receives ordination to the priesthood and first becomes a teacher at the high school of his community in Ehrenbreitstein. From 1912 he works as a spiritual director with the students in the newly built high school in Schoenstatt / Vallendar. It becomes evident that Father Kentenich is a gifted pedagogue. His educational goal is clear and inspires the students: to be firm, free personalities, to live holy lives in the midst of the modern world. Father Kentenich guides the high school students to serious self-education, giving them Mary above all as Mother and Educator. 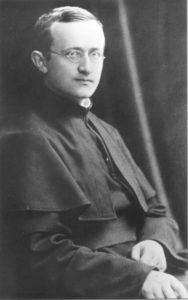 "Whoever gives and consecrates himself to the Blessed Mother, may expect an immeasurable blessing from God."

On October 18, 1914, he and some students dared to take the first step toward founding the Schoenstatt Movement. In a small chapel in Schoenstatt, they sealed a covenant with Mary, the "Covenant of Love." It includes the request to the Blessed Mother to be present in this chapel in a special way and to act as educator of the free man. This will become a place of pilgrimage and grace for many people, Father and the boys trust. They themselves want to give a radical life of faith and commitment to Schoenstatt as their contribution. "Nothing without you - nothing without us" is the short formula for the intense communion on the road with Mary that now begins.

The vision of the founding hour is gradually becoming a reality. Today the chapel in Schoenstatt is the place of origin of a worldwide movement for men and women, children and youth, families and priests. There are now about 180 Schoenstatt chapels in more than 30 countries around the world. Countless people go on pilgrimage to them and ask Mary for the grace to realize their Christian vocation in all the challenges of life, in the Church and in society.

1941 - 1945 Father Kentenich is a prisoner of the National Socialists, first in the prison of Koblenz, then in the concentration camp of Dachau. Even in the concentration camp, he continued to work undaunted on his life's task of proclaiming God's merciful love to people and helping them to become great lovers themselves through Mary's help. Many prisoners were able to experience God very closely through Father Kentenich in the hell of Dachau.

Journeys around the world

In 1947/1948, Father Kentenich began traveling to South America, Africa, and the United States to maintain international contacts and to help the Schoenstatt peoples in these countries to build up the Movement. His love for the Blessed Mother urges him to work for her worldwide. 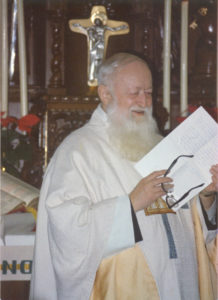 From 1951 -1965 the Church separates Fr. Milwaukee (USA) is assigned to him as a place of residence. Responsible ecclesiastical authorities examine him and his foundation.

During the long years of absence from Schoenstatt, Father Kentenich's love for the Church and fidelity to his Work prove themselves. 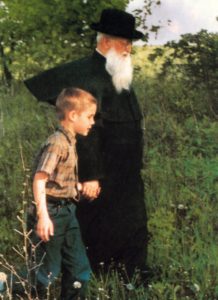 He returned to Schoenstatt on Christmas Eve 1965. In the time remaining to him, the 80-year-old worked uninterruptedly on the interior and exterior formation of the Schoenstatt Movement. In spite of all the appointments, conferences, retreats, and the great daily workload, his first concern is always for the individual. His deep attachment to God and the paternal goodness that he radiates gives many an inkling of the love of God, our Father. 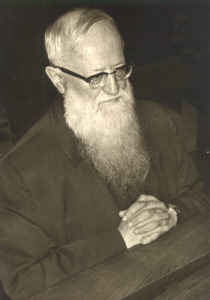 On September 15, 1968, Father Kentenich was called home by God, shortly after celebrating Holy Mass for the first time in the newly built Holy Trinity Church on Mount Schoenstatt.

Now he can continue his life's mission in a new way. That he is doing this has already been experienced by many people who connect with him and turn to him in their needs.

"God also requires in the reorganization of today's world our enlightened powerful cooperation."

"Homeward to the Father goes our way."

More information about Father Kentenich and the Schoenstatt Movement, as well as suggestions for prayer available from: